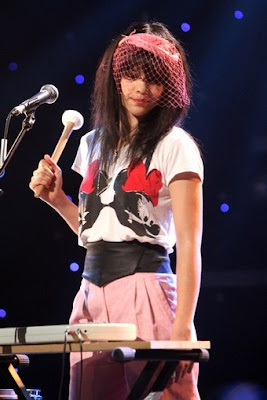 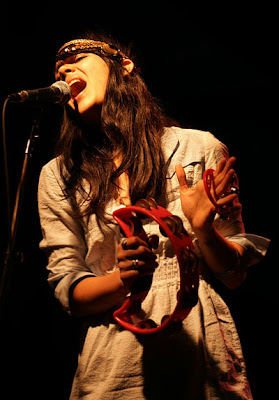 NO IDEA where this chick came from suddenly but she's the new hot shit around. Sadly, despite her rocking style, I have not yet been compelled to check out her music. But I had to post her because of this: 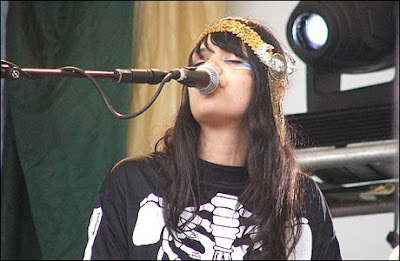 As you might know, it was on my birthday wishlist and I voiced my desires about owning a skeleton suit wayyy back when I saw William Eadon's collection of them on the Selby. And it's eerie as fuck because she is doing exactly what I said I would do in one, and she reminds me of all the other fierce chicks on the music scene that I listed in that post while doing it. But who is Natasha Khan really?

Well, unfortunately, I have this weirdity where I have to take my time exploring different things. Like this. I am just at the moment pretty fucking content with the range on my iPod and don't wanna go overboard with the constant barrage of new peeps trying so hard to be unique that they end up being generic. This is not to say that this is what Bat for Lashes (her band) is like (I mean, how the fuck would I know?) but I am getting the general idea that she is the female version of Devandra Banhart or something. Am I wrong? Maybe. I'll wait and find out. You go on ahead. As for now, the only knowledge I hold is that she's Asian and gorgeousssss. Here's the link.
Posted by Kara at 7:25 PM

Natasha aka Bat for Lashes is a lovely girl and one of the best dressed ones I've had the pleasure of knowing. She spends a decent amount of time in Brooklyn and posed for the Cheek-ie lookbook shoot for my friend Angela along with me and other friends. (http://www.cheek-ie.com/spring09.php)