IN THE SHADOW PLAY, ACTING OUT YOUR OWN DEATH

Japanese Rope Bondage is an exquisite art form that I really admire. With that said, aren't these the most perfect cell phone charms to acquire? SOOO cute! The website I found this on is a whole other level of Japanese Kawaii invasion, what with its glitter text and oddly-shaped stuffed animals with squished expressions, and I think I randomly came across it while doing research on Bondage images for my novel. Don't ask, because I'm actually not in a stable enough writing position to tell. 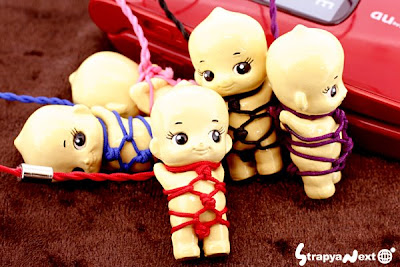 Today was crazy. Tomorrow I'm going to the British Library to do research, then meeting friends for the Hussein Chalayan Exhibition From Fashion and Back. Then we're going to watch Milk. Honestly, I've never heard of Harvey Milk, but if I list you the characters, you'll see why this will be worth it: Sean Penn, Josh Brolin, James Franco, Emile Hirsch and Diego Luna?? Do I have to list why I love this cast?

-SEAN PENN! I shouldn't have to say more but, I find him oddly attractive, plus he directed INTO THE WILD, that epic, tear-jerking movie about Christopher McCandless, who was played by EMILE HIRSCH! He practically wowed me out of my chair with that one. It's one of the last movies I've seen that had me walking around aimlessly afterward thinking too hard about life and how much there is left of it for me to explore. (P.S. Vampire girl from Twilight and Hayden P.'s partner in dolphin-freeing crime Kristen Stewart is in this, and I like her for some reason).

-EMILE HIRSCH is the next Leonardo DiCaprio; and DiCaprio is actually my favourite actor. So that might make Hirsch my second...I think. Anyway, how could you not have loved THE DANGEROUS LIVES OF ALTAR BOYS, INTO THE WILD, LORDS OF DOGTOWN and THE EMPEROR'S CLUB?

-JOSH BROLIN. Let's put aside W and reminisce over the superb sexiness of his role in NO COUNTRY FOR OLD MEN. (Still can't believe he died)

-JAMES FRANCO is just hot. (did you know he's the voice of the boyfriend on the phone in INTERVIEW with Sienna Miller?) Ha.

-DIEGO LUNA. Y TU MAMA TAMBIEN, anyone? This holds a spot in my DVD collection, and should in yours also.