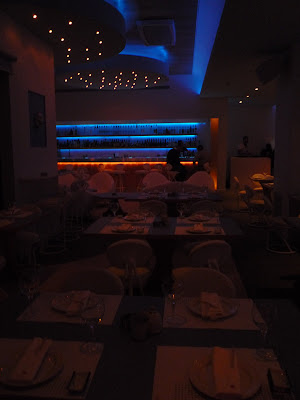 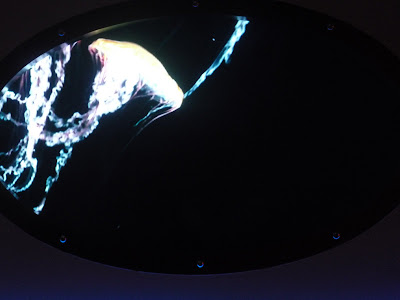 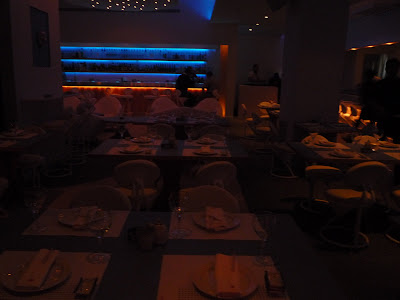 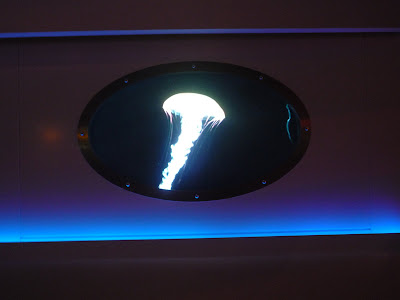 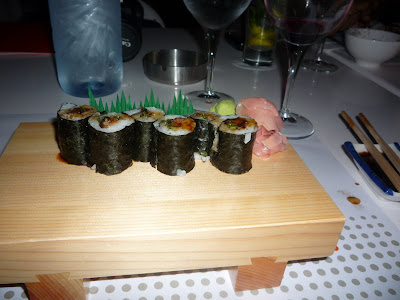 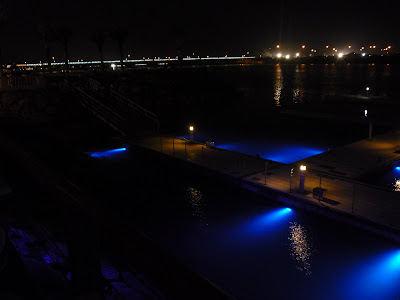 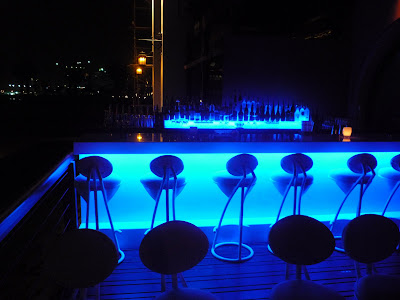 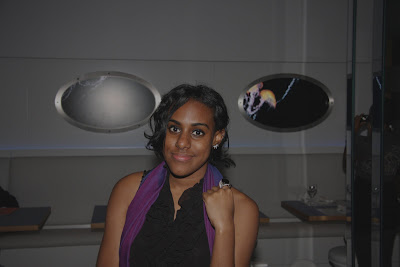 Those are real lyrics in this heading from C.S.S...which is awesome because I turned 20 yesterday, which was the 10th. Albeit spending an hour of the 'great' day every year since I turned 18 bawling and wriggling in bed (I'm acting like that's eons), I had a great birthday this year.

My fam took me to dinner at Sho Cho, this trendy Japanese restaurant and bar at the newly opened Shangri-La Hotel in Abu Dhabi. I don't know what it is with other regions apart from Japan and California, but everyone else just LOVES to put sushi and its tasty counterparts on a very high pedestal that's labelled 'Too Exotic for the Average Consumer' so let's just say I have the bill as a souvenir. What's also very funny about that is that the best sushi I've ever had was at this little diner-esque place in Anaheim with flourescent lighting and one little old lady who pretty much knew you by name. And, without exaggerating too much, the size of their rolls could almost easily be compared to that of a child's fist. Look at your fist. Awesome, huh?

The food at Sho Cho certainly isn't something to do back flips over or anything but I wasn't having any other cuisine for my birthday and there are like 5 Japanese restaurants in the country, so it more than did it for me. The unagi (eel) put me to bed a happy little lady that night. I was still 19 then though.

As for my actual birthday, I took whatever I could get. Knowing nearly no one out here my age but flight attendants, I let this really great Filipina girlfriend take me out and show me her side of Abu Dhabi night life. I first ended up at a comfortably weathered bar called 'Blue Bay' and, because I knew what was soon to come while walking up those steps and hearing thumpy Latin music, I ordered a beer before I found her. I. CANNOT. DANCE. Yes, sure I can keep time like nobody's business and do the occasional Shakira or some wriggly alternative, and I can grind you to the floor (I mean, come on, I'm Trinidadian. Carnival is a profession.), and I'm no stranger to moshing/headbanging, but Latin is not my shit.
But you know nice people. Nice people like to smile and chide you on and suggest RIDICULOUS things and drag you up on stage to make you learn a shaky step or two (RIDICULOUS THING!). So new guy friend Marlon did so and at first, I think he had to do a double take to make sure he wasn't dancing with a mop but then my feet sort of came to an agreement and saved me for a couple minutes. Filipinos are the nicest people in the world, you know, really, but it was a bit heart-flourishing to bow at the end of the song and look up and see a sea of them clapping for the lost little black girl. Tragic, really.

They took me to another spot called Cinnabar at the Hilton; a roomier alternative with lots of cornered seating so I took a corner and cheered them on. Good for them. Then we took a taxi to Cheers because some life savers wanted proper club music (I didn't think it was possible to have a Filipino back me up and suggest that, but I guess anything is possible with them once dancing is involved). Cheers was closed for a private event so we ended up at an overpacked place called Arkadia; live Fili band performing everything from commendable Bob Marley to 'okay-sure-why-not' Britney Spears, cheap drinks (actually free...because I'm ...hot?) and a good DJ. I smell like a burning building this morning but I had a good time.

AMAY-HAY-ZING gifts to show you later on in another post but I have a carrot cake to blow out, a suitcase to pack, an essay to polish and send off, an appointment, a souvenir list to tick off and one more day to cuddle my dog so, I'll be on my way now.
Posted by Kara at 4:18 AM