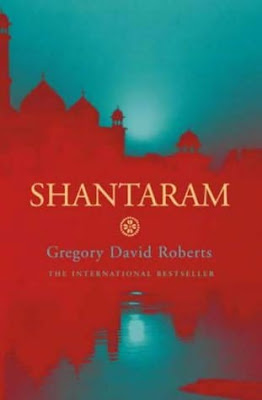 Yes. It's clear I've been on about books a lot lately. They show up in the last two posts. That would be due to my obviously novel intense and reading-heavy Creative Writing Major. Final year means our lecturers are pelting us with books. There has been no end to the constant reading since summer '08, and frankly, I've gotten way too accustomed to it, devouring 2 decent sized books a week or so. And because, considering my career in writing, it will never end, I added a Currently Reading section on the left.

This book's taking a tad longer than my average few days, what with it being 933 pages long. But this is a read! I mean, the REAL LIFE journey of a writer who escaped from prison in Australia. He was an armed robber and heroin addict whose wife obviously left him, and he lost custody of his kids. This guy runs off to India illegally where he gets into the mafia for which he does money laundering, forging and street soldiering. He deals drugs for tourists, dabbles in the black market, acts in Bollywood films, fights with the Mujahedeen in Afghanistan, and accidentally becomes a doctor for the poor when he is forced to start living in the slums after all his money gets stolen; which then brought about a free health clinic. It's also a love story to India and some chick called Karla. No big deal.

Impossible as it sounds, it gets even better. He wrote this cinderblock sized novel three times after prison guards trashed the first two versions. Wait. He sold the movie rights to Johnny Depp (who will play him in 2011. YES!) because he likes him (Icannotwaitomgomgomg). Wait. And he looks like this. AWWWW I love it.

Check it out, if you're ready and willing to brave the word count.
Posted by Kara at 10:01 PM