Ha. That blog title should get me more hits. But seriously, I did graveyard shifts all weekend, what with having to grope around Old Street to review the new Trash Palace and Ghetto on Friday night, then stomping around and taking appalling pictures at the Defenders of the Faith II Tour. Well yeah. Not sure what kind of photographic genius I expected while standing at the edge of the pit, shoving guys to the floor and screaming my lungs to ashes. So the only decent pictures I can show are from the bathroom stall, the bus home and my bedroom floor. What I wore... 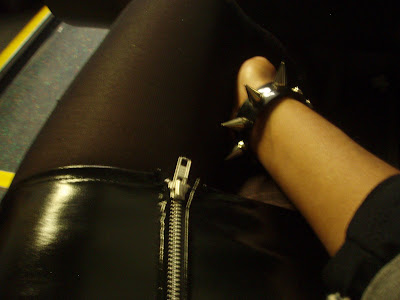 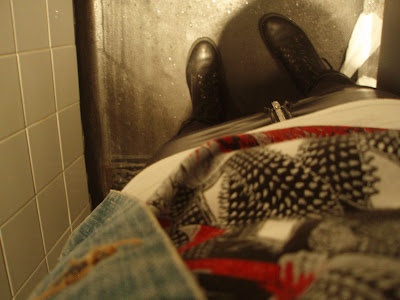 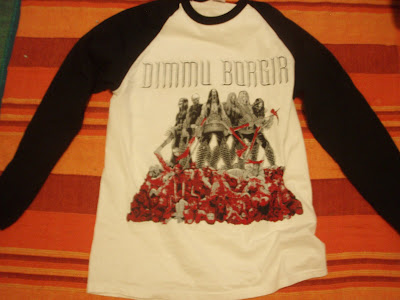 A good few years back when I thought I would amount to nothing and my only skill was playing the violin, I decided I was going to be a background violinist for Dimmu Borgir. But that was before I knew they used a keyboard because I was only listening to them by CD. So of course I went to their show last night! To be honest though, I expected a lot more from them, even though they totally took it home for me when they played Puritania and Progenies of the Great Apocalypse. And I was totally there for them only, and one of the obvious few at that. Otherwise, even though I bought that DB shirt just outside, ran to the bathroom during Five Finger Death Punch and changed into it, Lamb of God was worlds better. Oh yeah, and DB wore THE boots. Do you think their girlfriends/wives own these?

I've always loved baseball uniform t-shirts like that with the long sleeves in a different colour. So I had to get it. Plus my old DB t-shirt is one of those shit ones off the side of the road where the image isn't even properly printed or aligned, and it's like they made it by stuffing some fabric into a computer printer and clicking print on their laptops. My Children of Bodom t-shirt is like that too. I remember buying them both at the same time years back when I first met Panda and was showing him around Camden. I was 17. He didn't know me that well and was impressed that my shopping technique of scanning, choosing and buying took all of 3 minutes (Hun, when it comes to band t-shirts, you just know instantly what you're gonna buy. When you follow a band, it's for life. That doesn't apply if you walk into, let's say, Topshop for example).

Funnily enough, Children of Bodom is playing on Thursday in LDN. Would kill to be there but not sure if it's in my bank account's best interests at the moment. We'll see.

What I also love about these metal shows is that they're hardly ever sold out, and cheap! I remember seeing Devil Driver, 3 Inches of Blood, ARCH ENEMY, AND OPETH with my friend Mathew for under 13 quid. WTF!!! Arch Enemy and Opeth are two of my all time favourite metal bands. They played the Defenders of the Faith tour in April and I've never been to anything better regarding Metal.

Other bits of the weekend....the Trash Palace thing; if I get the job, the review will be up for you to see online soon, along with many more. But all in all it was a fun night that resulted in some new Facebook friends.

P.S. I didn't even realise that rushing to get dressed for the gig yesterday (Valentine's Day) I grabbed the first pair of underwear in my closet and turns out it was an American Eagle pair with red hearts on it. Anyways Happy Valentine's Day all.

KARA! HAHAHA
where have you been all my life?
your comments on my page are missed!
loving the leathered skirt and spikes
you know its how I roll!

Awww. But seriously...I still can't get over that outfit, Ji!!!! Glad I've got you for company in the blogosphere. And Jen and Sanna. xx

Holy shit, man. Where did you get that zippered, vinyl-looking skirt?

Please say "a sex shop" and not "it's vintage" or I will be spitting tacks.

LOL ur in luck. it's a sex/fetish shop called Honour xx