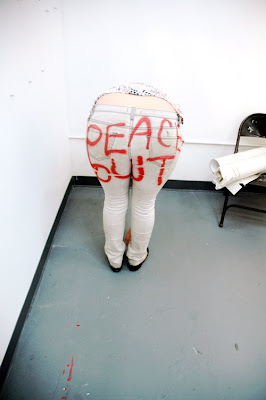 I know. Absence. Chill out for a bit. I am officially on vacation after a gruelling last day yesterday where I ran around volunteering to host our uni's Creative Writing Day then had to get all dolled up in someone else's flat for the soiree where I performed my first reading. Went well. But, of course, I was on stage, so I can't tell you what the reception was like. There was a whistle somewhere in there, and a girl in a nice hat who said the piece was 'absolutely lush'? And there were 32 bottles of free wine. So that was that.
More from me soon, when I am done vegetating in bed with a box of orange juice. But for now:
-whoever this sexy-backed bitch is, well, firstly, she knows how to dress to save lives and she nicked my back art. A friend of mine also asked permission for it. But, it's all good. I'm movin' on to my next big ink project soon.
-look out for a big ass picture post of my christmas wish list..whenever I feel like..
-R.I.P. Bettie Page. Funny how she only just became a recent fashion icon of mine what with my newfound interest in fetishism and sexiness and all that...
-speaking of which, the inescapable bondage workshop was heights. And I decided that if there was such a thing (is there?), I would get a PhD in Japanese Rope Bondage. It's beyond gorgeous and I class it as an intricate work of art rather than sleaze. Got tied up myself. Pictures soon (possibly). Plus I got to chill out with Chanta Rose and watch male submissives roll around on the floor in their wife's panties trying to get themselves undone because their mistresses wouldn't untie them. fun.
-Joshua Idehen is a demi-god of the spoken word scene who performed at our soiree last night. He has a buncha poetry/spoken word/music stuffs going on that I can't seem to pinpoint but start here if you're interested in that sought of epic mess, and check him out sometime.
-some lovely family have just flown into London and I just got invited out to dinner at Carluccio's tomorrow, then to sleep over at their chic South Ken temp. pad (sigh...my life). Carluccio's is one of those italian musts in the city. They're one of those good ones that have like 8 things on their menu because they specialize in them? Yuh know? With that said, visit...
-Going to finally see that Twilight movie next week with my cousin Becks, as we are one of the only few people in our usually very intellectual and tasteful circle who are hopeless fans. No one else would dare utter the words 'One ticket to Twilight' so we're forced to accompany each other. Not even my 13 year old sister would utter it apparently. How much lamer am I going to get?
-Then fly home on christmas eve and vegetate some more, but in better weather, with a free gym, running track and pool, a bigger comfier uncollegiate bed, home cooked food, parental hugs, new white puppies, reading FOR PLEASURE, and the list goes pleasantly on...Very excited and fingers are crossed and chafing that I get into business or first class again this time. That would be a great end to a taxing semester and THE BEST christmas present. Has anyone been in business/first on Etihad Airways? HM! Well, let me just say they are the national airline of Abu Dhabi (the richest city in the world) and they cater to the every need of its ridiculously deep-pocketed Arab community. And my dad flies captain for them. You get me? Good times, good times..
-and, just so I don't get harassed, the above picture of A REALLY GOOD IDEA is from the Garbage Dress blog, which is a good fashion read, actually. x
Posted by Kara at 10:14 AM

Ah, your reading.
Shall be posted on facebook v soon.
x