YOU'VE GOT ME UP AGAINST THE WALL

Haha. I thought this image found on google was funny.

RIGHT! So Skin Two posted up this cool interview with bondage expert Esinem (har har) that I sub-edited. And because I got this really short notice call about a bondage workshop going on today, I couldn't attend so I went over to Esinem's website to check out his rates (and I can't afford it- no surprise here). AND THEN, his website had a banner on top about The Bondage Awards. Checked that out, and I realised I am getting so deep into this thing that I actually know of people in the bondage scene that I could and would vote for.

Like, without a doubt, after admiring his work in Dave Naz's photo book L.A. Bondage (which I was able to keep after reviewing), Damon Pierce is so up there as a winner in the Best Rigger category (one day this will be me). I did a post on some of my favourite scans/riggings from the book, and I scanned some more a while back for my novel's research portfolio so expect some more awesome knot-and-tie photography up here in the not-too-distant future. No doubt, people who have won in the past must include Midori and Chanta Rose (whose Inescapable Rope Bondage class I attended in December). Here's one of Damon's riggings. I assure you, he's done WAY BETTER, but...PURPLE ROPE! I also find this funny because it's yoga. 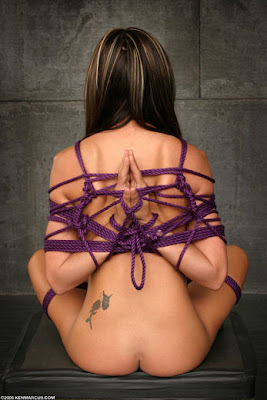 There's also a best writer category, which made me laugh, because my novel has aspects of Bondage in it (a lot!) and at this very moment, my editing group is going over the first three chapters and will be giving me feedback on them on Monday. Really interested to see what they think...haha. But no doubt past winners have probably included Violet Blue and/or some of the people in Best Sex Writing and Best Women's Erotica, whose 2009 issues I've just reviewed as well.

I don't know who would win Best Photographer, but, once again, Dave Naz would probably be mentioned. Speaking of Bondage photography this Mario Sorrenti fashion editorial was heights too (knew I'd end up bringing this up again - too good!). I also like Nobuyoshi Araki (sucker for Japan).

Just talked to my friend Mistress Ivy about the rope thing today. It's also a Play Party, so I guess part of me is glad I'm not going. Play's more of a couples thing, or something I would do only with Mistress Ivy because I'm only comfortable with her, being new to the scene and all. I miss my boyfriend. Anyways, Mistress Ivy and I are definitely going to the Skin Two Yearbook Launch Party on the 25th!!! So stoked for this...and need to find an outfit. But I'm guessing the PVC mini comes out again.
Posted by Kara at 1:37 PM

Labels: Magazines, Picture This, The Perv, What I Read, Write On

I'm going to that as well, actually.

that's so cool. i'll be the one going as a black tube of toothpaste, and being a teetering mess.

did u get invited by someone or have u been a skin two reader?

Also, they showed this at the ICA recently - I don't know if you saw it, but if not you should try to see it online somewhere:

My first comment apparently didn't show - I used to read it a few years back and apparently I'm still on their mailing list. I found a few copies in my teenage bedroom the last time I went home, in fact.