MY EYES ARE DOING SOMERSAULTS 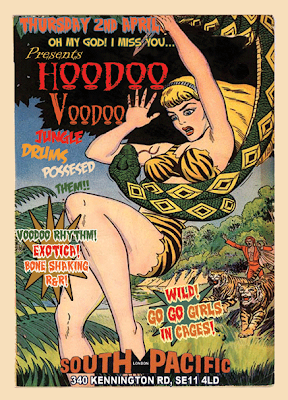 You can't tell me this shit doesn't look amazing! (click the picky for details and awesome sexy wexy music and pics).

Okay, so I lied. I said this next post would be some awesome scans from War, Plastique and i-D. Toughen up. Will post some other time.

I changed my layout and I haven't been around. Is this layout cooler or should I take a step back?

Real busy as per usual, writing up reviews on punk bars in Kingston and essays on why the novel is or isn't dead, according to V.S. Naipaul.

Harper's also just emailed me and said they will keep my CV on file for a while.

I really wanna go to that party...Becks and Fi better not fail me.

Slow as ever, I'm crawling through and saving tons of uber fashion images from style.com of the Fall RTW '09 variety. Gonna make a killer fashion comeback on here with them in a hot fuckin' minute.

Le Vampyre had a 2 for 1 ticket for the cinema so he took me to see Watchmen (BLUE PENIS!!!) and I had a really good time despite the blood-crawling rendition of Hallelujah (which I was told was the original by my cousin who looked at me in dismay for not knowing that- sorry, but Jeff Buckley topped it) played while the two lesser superheros fucked (four eyes and Megan Fox wannabe/neverbe). Ugh. Makes me shiver all over again. Was going to get Panda the graphic novel for his birthday in July but he said he read it in one standing at his local store when he was younger. Poo. He says I can still get it but where's the fun in that? My present giving history for this guy is so shitty it's not funny.

So it's been reported that my ex made it out of Trinidad and Tobago alive this past week because his status has changed on Facebook since. He says I forgot to tell him he would be bitten alive by mosquitoes. Well, love, you decided to sleep in a car for a week. But glad he had only good news after that and got his scuba on.

Went to Wagamama today for proper nourishment (the kind where my hands are not involved) to try to wrench myself from the grip of a vicious headache. They do amazing hot chocolate now, so I had that with my Amai Udon and just stared out the window, looking back at all the people on the double decker buses blatantly watching me eat. I started reading the first sentence of this book I'm citing in my essay called 'A History of Reading'. My brain started complaining so I closed it and put it away. My favourite waitress there and I were both having shitty days so she gave me some free green tea (Yeah, I know it's free in the US regardless- shut up) and I gave her a good tip.

I'm attempting to give my hair an interesting curly look but I don't have curlers and I don't feel like frying its luscious life away with my GHD straightener tonight so I rolled it with some felt tip markers. Looks kinda funky. Red, Purple, Yellow, Orange and Green.

After the movie, Le Vampyre and I went to the Belfry (uni bar) and got our faces painted with 4 leaf clovers by my Burmese friend. We played balloon volleyball next to the speakers while my bouncer/yoga teacher friend looked on amused. The Norweigan asked me if my boyfriend and I broke up yet and told me to come see his band play in Camden this Thursday. I told him to find me on facebook and try to persuade me from there. He doesn't know my name. A bunch of us drank £1 pints of Carling and baby guinness shots (kahlua with a film of Bailey's on top- cutest thing ever!?). Then The Vegan and I attempted to watch Ichi the Killer back at Le Vampyre's, with cups of microwaveable noodles and rose wine but we didn't finish and scheduled it for another night; some time after the gruelling days ahead that lead to hand-in of our third year specifics - March 31st. I had a bus pass so instead of walking the 15 minutes home around 2, I favoured laziness and waited. Then the Indian Italian showed up in his red Honda Civic with white stripes, made a U-Turn and gave me a ride back to my campus, where he too lives. He had just come from a strip club with friends. They got a deal with Jaguar and are now rolling in £10,000 a month each so he spent the night throwing money at the strippers. He doesn't drink. He was high as a kite though.

After that, I came home and cooked tuna steak and ate it and went to bed. I woke up at some ridiculous time before 7am and talked to Sebastian and Panda online. Panda and I had a really pleasant conversation this time, which is sort of a first for us these days. Film critiquing, hair loss, the pros and cons of eating sushi off of Megan Fox, witty banter et al. I really liked it. And Sebastian sent me some solo tracks he's working on, and I really dug them. I'm hoping he and Panda can get together and make music videos as they're both in L.A. and Panda's working more and more directing some himself. I love being around on set when he's directing, watching him concentrate on lighting and directing people around, and I like watching his focus as he studies what's on the camera. I had fun on my first trip out to see him running alongside this kid with a bounce card. They were filming him running.

I forgot to mention that I really liked the first Skin Two Yearbook that was launched this month. I loved the editorial by Silent View, and have been meaning to post about it on here, to no avail of course. And I am thinking that if I do manage to move out to Cali this year, I'll apply to be their freelance California correspondent. Everyone knows the scene's big as shit in SF, so stoked about that. Still looking forward to the launch party next week even though I'm sure my friend Mistress Ivy is gonna bail on me at the last minute and it'll be me alone in a PVC skirt gargling too many glasses of wine. I would also love to attend the launch night of Club Crimson in April. (ON ANOTHER NOTE: I see that a review of mine was posted recently on this book I really enjoyed; it's one of my favourites actually...in books in general; not just in the category of erotica- the guy's good and I hope I can somehow sometime cross paths with him when I'm in SF).

This post is disgustingly long. I hope I'm now exempt of all charges for blog abandonment.
Posted by Kara at 11:58 PM

Labels: Adventures in Academics, My Life and Other Casualties, The Perv, What I Read, Working Girl, Write On

My boyfriend and I DJed at the preview of The Watchmen and we had to watch the film afterwards. When it got to the sex scene, he leant in and mumbled 'We could be at home actually having sex instead of watching this shit". I was inclined to agree.

fuck. me. it was just that bloody awful for real. wish my boyf was even here to SAY that to me while I watched it, but I was with this guy that he now thinks I went on a date with to see it. I'd hardly fuckin call that a date, seeing other people fuck badly to bad music.

i hope u two called it quits and went home to fuck. lol

no but otherwise...i thought the film was entertaining...

We didn't really feel it, to be honest. I think it started out with real political intent and then watered it down for mainstream consumption. I understand that to carry out that kind of message wholesale wouldn't be saleable, but still. Either you're making an edgy film, or you're making Spiderman 3.