So we had hella errands to run in town yesterday and conveniently, it was Free Thursdays at the Japanese American National Museum and Panda had been wanting to see Mike Shinoda's show 'Glorious Excess (Dies)' - yeah, he's a big Linkin Park fan, bless him. So it was there we ended up after picking up new mags and film books and free clothes at Kill City (Seb please don't kill me - very last minute).

It was aite...A bit too glossy street art for me (which, I suppose, was his intention, and don't get me wrong, glossy street art can be heights - cue Fafi). But it's about consumption and celebrity culture, and society obsessions and...excessiveness. I just love that it sort of stemmed from him watching some pop culture show on british TV and not knowing a single one of the people they were calling celebrities (which is exactly what I've been ranting about for years when I lived in London - british celebrities aren't really celebrities, and all across the world, it seems it's becoming a trend - cue reality tv). 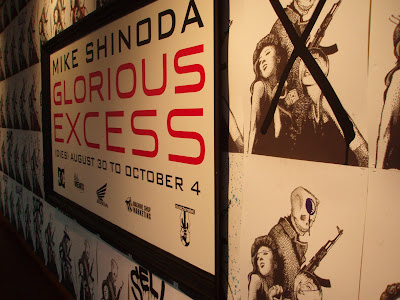 Loved the celebrity collage (Rihanna's busted up face stuck out most). I stayed at this wall the longest, catching up on my gossip. I used to do a lot mag collages in my early high school days. 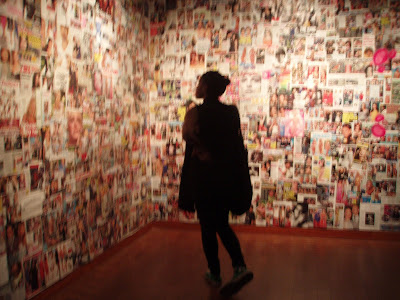 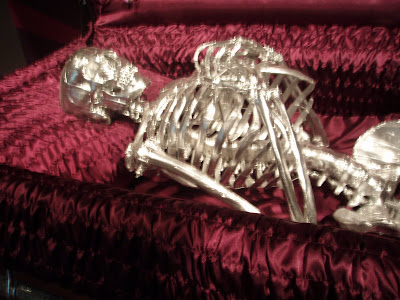 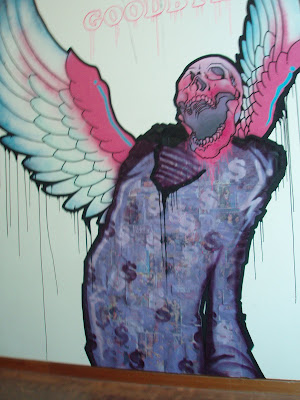 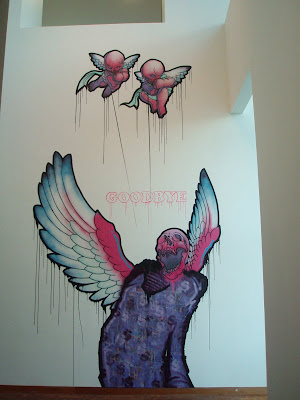 It was generally a lot of glossy skulls intruding on 'the good life' that was illustrated by party-going VIPs made up of millions of dollar signs; they all died. But maybe you're interesed in the show - check out more here.

After browsing the rest of the museum, we encountered the Kogi truck right outside which, the longer I've stayed here, I realised, has a lot of followers, so we decided to see what all the hype was about. I had the kimchi quesadilla (it was good, but not 'follow me around town' good). Panda tried the short ribs taco and spicy chicken taco. With regards to the hype, he concurs. He also became severely sick by the time we got home.

-----
Today I'm visiting a dungeon near Disneyland (sounds weird) and then Panda and I might go to a couchsurfng party in Hollywood.
Posted by Kara at 8:24 PM