First off, 'Collecting Things' is a really good sound snippet created by Jon Brion (legendary!) for the Eternal Sunshine...soundtrack and I'm listening to and adoring it right now. He is such a talented composer, and one of my faves. Also, Jon Brion does stand-up at Largo most weeks apparently. I'd like to check him before I leave. ALSO, speaking of Largo, funny person Aziz Ansari is performing there this Saturday. Check it! Yes, as you've probably observed, this post is a catch-up of all the cool knowledge I've gained on my adventures around LA. I've been slightly shitty at documenting the trip and it's almost up. And this is me today running errands: 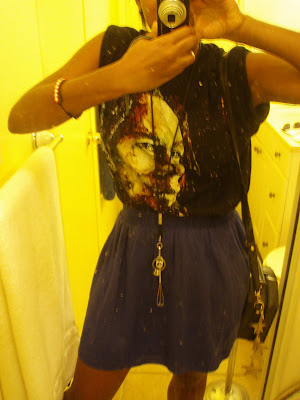 I have to say, the crowd of bare-backed mexicans rigorously competing at handball around the corner really appreciated the fluttery skirt today. It was sooo hot that when my bare legs were resting on the seat of the leather chair as I lay back to get my eyebrows threaded, it looked like I had pissed myself when I got up. MUCHO EMBARASSING! And here's a better look at my necklace. It's in progress...collecting things... 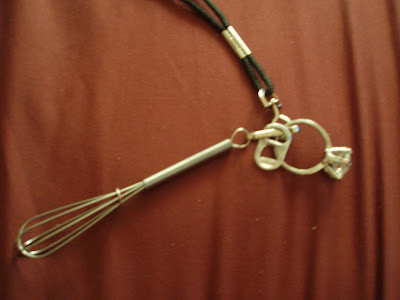 And then all other accessories worn today. 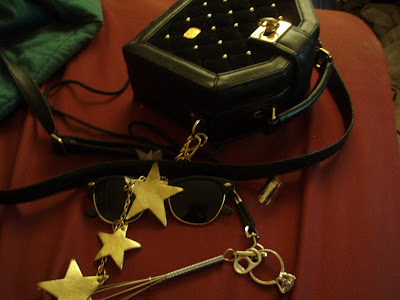 Vans with purple lacings were my shoes of choice. I am really shit at doing the whole daily outfit documentation. I love the speckled bathroom mirror in full length shot above. Can't be bovvered.

I know. I still have to show you what I bought at Cobra Snake's yard sale. He was...delightfully messy. He also couldn't understand what the fuck I was saying when I asked for a mirror to see my purchases so I had to americanize it and slow it down: MEE-RURRREE. But anyways, apart from those purchases, I received the best fucking things in the mail this week.

#1
One of my favourite authors, whose awesome book I reviewed way back while interning at Skin Two (before I could write reviews very well, might I add), well he started following me on twitter and then proceeded to send me a free copy of his latest book, which came out like a week ago, and which I've omg'd about in the past here. Yes, reader; just die! Anddd he's stopping in LA on the 24th and 25th for his book tour, where I will be in full stalker swing. Really, he's very talented. Like, my boyfriend's worried talented. 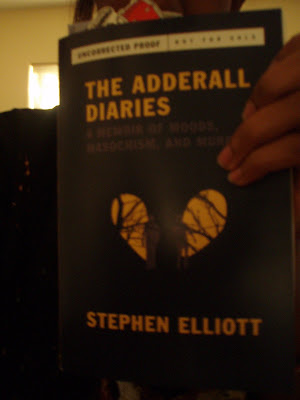 #2
Of lesser importance in my eyes right now, my temporary free Vistaprint business cards came in the mail too. As I briefly mentioned before, I'm working on my career and so there's a wordpress page for the 'no-bullshit' me in the works too, until I can pay for a domain etc. Shit's getting serious, yo. 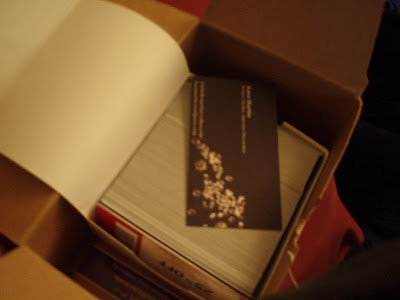 Apart from that, I've been spending loads of money experimenting with beauty and body enhancing products, drinking sangria, hanging with awesome pretty-haired friends, interviewing loads of kinky, crazy people in dungeons and fetish clubs, and this weekend I've been invited to a tight immobilizing bondage workshop (YES HAHAHAA - Panda is not impressed). I'll probably also spend a day in the cinema watching It Might Get Loud, 500 Days of Summer and The September Issue, and I'm also meeting up with the Kill City store manager on Melrose to pick out some free shit. As much as you don't want to hear it, life is good. IT IS! Seriously, do a double take.

I have a cheesy american dinner and a movie date now with Panda and he just got home. Must run.
Posted by Kara at 3:43 AM

Labels: 1 Big Ball of Juicy Love Sinigang Mix, Californication, Fashion Fuck Yeah's, Girl on the Verge..., My Life and Other Casualties, Oooooh, The Perv, What I Read