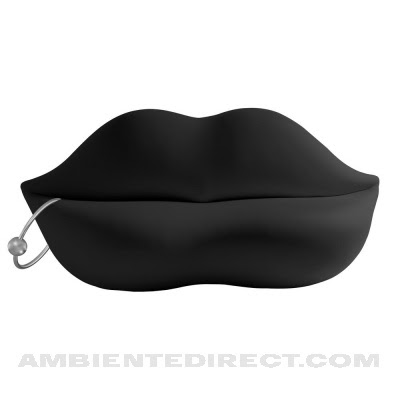 Gufram's Dark Lady Sofa. I'm pretty sure I've seen it before but either way I stumbled upon it again while flipping through an old mag, recovering from a night of excess Echo Falls with the girls at Beck's mom's 'pad' near Bond Street. I'm not sure I would actually want this for my home though...but I just had to post something, didn't I? I haven't seen you since Friday!

Okay so...finally, April's gonna fuck itself. That was THE most harrowing month all fucking year for me. I sit here as ruffled truth that it is possible to do 936.666 hours of work in a month. but allow me to add a couple more onto that as it ain't fuckin' over yet. My last major university deadline EVER is due tomorrow, and of course much bacchanal must be had afterward, so ruffled, blogging, and late spring cleaning I might be, but a research portfolio, three chapters of a novel, a covering letter to a publishing house, a synopsis, chapter and character breakdown and a 2,500 word essay must appear before me by then.

In other news, yesterday was my last day at the magazine I was interning at. I had such a great two months there, and never even felt the need to call in sick out of sheer boredom of the day's tasks ahead, as previously done with other magazines (truth hurts). I also took away a new friend, amazing contacts, a couple of freebies here and there from reviewing stuff and attending press events, a pretty card signed by everyone including people who didn't even know my name, a box of Green and Black's organic chocolate, some cash and orchids. They told me the flowers will last up to two months. Not in my company, they won't. But it's nice. I've only ever gotten flowers once before this from my boyfriend. The cash has immediately gone towards my California summer and sits in full-on lotus pose in my savings account. However, when I got home and sat gobbling a fat pasta salad while pressing my hair before heading to the Black Knave/Drama magazine party, I got that much-awaited email from Dazed and Confused, asking me if I could start tomorrow for a week. I had to decline due to this academic business, but am now on file for future freelance positions; along with everybody else who was lined up outside the mag party, I bet.

We didn't end up staying at the party though. After Fi and I took turns crossing the street to the nearest pub to down shots or collect Coronas, waiting in line for more than 30 mins. seemed beneath us so we met Becks in Bond Street and got wasted at her mom's abandoned flat, grateful that we were no longer in the presence of pretentious company sporting half shaved heads, and people who befriended us and then sprinted off to lick the soles of the magazine's cohorts leaving us stranded in line. I REMEMBER WHAT YOU LOOK LIKE, which, in itself, is sad. Fi ran into a friend who worked for the London Paper on the celebrity buzz. She was heading off because the paps told her there was no one of note inside. So obviously, we weren't in there.

After much discussion on Beck's naked photoshoots (and other bodily matters including breast cancer via deoderant and whether sleeping sans underwear was the most obvious option), possible outfit ideas for the next Hoodoo Voodoo, mapping out plans to form an unstoppable coalition of 3 and host party nights, yard/car boot sales and form our own magazine, all this and more with a backdrop of Siouxsie and the Banshees radio (which I am pleased to know made Fi sway like an emphatic church worshipper about to be touched by the holy ghost, because I suggested it), we went to bed with plans to breakfast in the neighbouring pleasantries of the oxford street area the next day, which we shabbily did. We plan to try it again, but with better clothes and bigger wallets, at Selfridges some time this month.

As for now, my laundry needs transferring before the unwashed miscreants on campus get a hold of it and dump it to the side. After that, word counts, bibliographies, citations, pristine grammar et al. Tomorrow I'm getting more 'fuck me' pills to last me through the summer! Then handing in my work, easing myself into an evening of inebriation with le Vampyre, dropping in for a mexican dinner for my friend's birthday, then rushing back home to shove my breasts into my flourescent green bikini top because this week's sorry excuse for a college party's theme is 'Life's a Beach!' (well that was what I may have called it- it's actually simply 'Beach Party' - that should give you the general idea...). Is this good enough for a comeback post?
Posted by Kara at 6:27 PM

Labels: Going Out, Haha, Magazines, My Life and Other Casualties, Ridonculous, Working Girl