LIFE IS SHORT. STUNT IT. 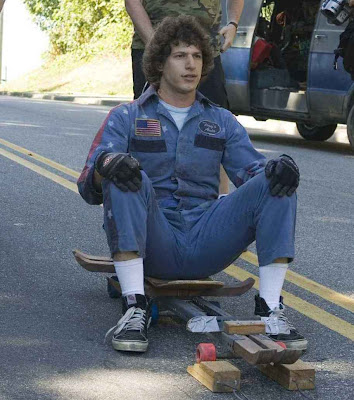 Clearly, I had an idle moment recently and took in the movie Hot Rod that was conveniently On Demand on the flat screen. I confess. I laughed. I do quite like Andy Samberg actually. But anyway, his stunt outfit is my current clothing inspiration; and his quote 'Life is short. Stunt it.' is so fucking hilarious. It NEEDS to be on a t-shirt (is it? Please direct me to it.). I think I need me some high top Vans now. Time for an upgrade. Which reminds me, I have a pair of faithfully crusty green Converse high tops at the bottom of one of my unpacked suitcases dying for some wearage. Might take them out for a spin tomorrow. I'm renting a bike for an hour to fuck around with along the Corniche (waterfront).

I'm trying to mix up my workout routine. Today I did one of those 30 minute treadmill workout programmes where they fuck with your head and your feet and change the speed and incline like every fucking minute. And then I did laps in the pool. I also do yoga and have been trying out that crossfit hellishness that my boyfriend recommended, along with other odd bits at the gym but I get bored easily with workouts so it would be good to take it to the streets tomorrow. Would kill to get some tennis in but I think the punishing heat here would kill me first. Tennis just doesn't happen this time of year. And because of a similar weather problem, it isn't 'surfing season' in Dubai. So I'm obviously counting the days like a prison inmate until Los Angeles happens.

On Wednesday I'm getting my breasts checked; and it's not because of an amazing blogger's unsuspecting incident. I've always had on-again-off-again cyst and soreness problems ever since I started tampering with contraceptive pills (no big deal, but...maybe it is?) and the other day I failed to keep my mouth shut about some pain and my mom panicked like fuck. No harm, I guess. Plus I haven't gotten them checked in over 8 months. And who knows if those damn British medical people even knew what the fuck they were talking about? Not panicking, I promise.

P.S. Until my employment status gets pimped, I'll be posting 'I am still in need of a writing job' at the end of every post.
Posted by Kara at 11:42 PM

Hot Rod is fucking hilarious.Amber had it on DVD