MEMOS FROM HELL, AND BABY IT'S GETTING HOTTER ALL THE TIME

I'm getting sick. Just when I thought I had escaped it, I think I got swine flu today. Today was my car boot sale with Becks. It was...scary. There are a lot of poor, grubby, ugly people in London, reaching out and just grabbing, plucking, throwing around, vilifying...We barely parked and rolled out of the car strapped in bags when they all started gathering very very quietly waiting for us to set up. Not a sound! They just stood there. And when I bent down to unzip my suitcase, they pretty much helped me do it. Everyone crouched down too, and then...GO! They didn't even give me a chance to put it on the racks. It was so gross. So scary. Also I didn't make much money because it was depressing how devalued they wanted my stuff to become. All my expensive purchases were just being whored out. I nearly cried after my big blue quilted Chanel-esque bag walked away with some Asian girl for £6.

And then at one point, Becks' bf Leo just started putting up tags on my containers saying 50p and I had to run after him yelling and ripping them off and sticking them on me instead. Then he gave me a lecture on selling to the Battersea masses, and then I agreed to have one 50p pile. More grabbing and germs later, when things were starting to pick up because I dropped the prices a tiny bit, I started throwing things across to the 50p pile every 5 minutes. I just didn't care anymore. Made a fair amount but nowhere near what I had in mind, which is why I was glad to pack up half my stuff once it hit 4:15 and take it back home to my friends who appreciated it. I was folding one of my awesome big, grandpa, tartan jumpers from Pringle and found that the label had been ripped out because someone tried to 'un-designer' it, which then left two huge holes in it at the nape. PRINGLE IS STILL STITCHED ON THE SLEEVE, YOU FUCK WAD! AND, YOU DIDN'T EVEN BUY IT???!!!! 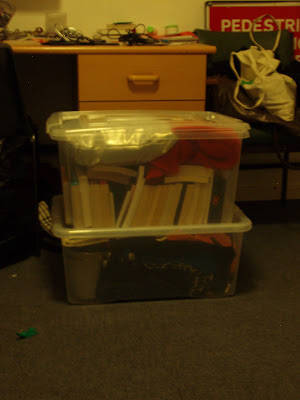 So back home. Now things are quite calm around here. Slowly but surely, the money is presenting itself, the material lifestyle is evaporating and I'm sitting here awkwardly listless because now I actually have a stretch of time with nothing going on for a couple of days, except for the odd chore (banking, uni, groceries, clinic). This weekend was intense. Scrambling to finish 3 reviews, sorting and organizing and dumping and folding and tagging and lugging...Now what? 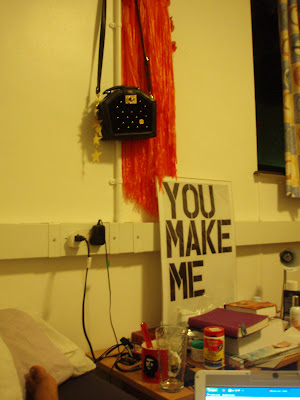 (LOOK! I ADDED A CHARM TO MY COFFIN BAG! AWWW!)
The last 2 weeks in London are pretty much gonna be selling, dropping off my obscene amount of fashion mags at the campus clinic like I did last year, giving a big, swift middle finger to this flat, visiting family in Cambridge and Catford, making stately wasted appearances at the two parties my two different groups of friends are throwing me, getting all bounty hunter on people's asses to get paid, and the odd champagne reception and summer ball. Yeah, there's some champagne reception for soon-to-be graduates this Thursday that I'm really only going to for the free booze and because a friend is meeting me there to buy my Skin Two Yearbook. Also I think my mom wants the picture they'll be taking for the future Kara shrine she'll start building this summer.

A bunch of us were going to go to Norfolk for a couple days and stay in my friend's old caravan on the beach getting stoned and drunk but I had to back out because there's just too much to be done in London before I go. I can't sell my shit if I'm stuck hungover for two days in a caravan on the outskirts. Plus I think our ride's brother got a girlfriend and so he's been hogging the car. I'll get in plenty of beach in California anyway, and if need be (which need won't, because I don't light up), I think I've got my weed sorted in LA. Plus it's cold here. You guys shouldn't even have beaches. Such a fucking pointless waste.
Rant over.

P.S. Becks, Leo and I stopped for a drink after the sale and ended up at West Putney Tavern and Leo came back from the loo and was like 'your name's up in the men's toilets.' So my 5-star review of their bar is up around their pub. I looked grubby as hell in my black hooded sweater with the hood up and bags under my eyes so I think the manager was just being nice when he smiled and said, 'Ah! It's a really good review.' He didn't believe I wrote it. Leo took a picture that I will send to my mummy!!!
Posted by Kara at 12:12 AM

Labels: London-ness Monster, My Life and Other Casualties, Pocketful of Pretty Green, Write On

omg it sounds like dawn of the dead. i couldn't have taken it, man.

Why not Brick Lane? That's easy as pie for selling stuff. I'm gonna go down there again myself this sunday.

isnt it like really annoying cus sometimes police might catch u and make u move? i dont have time for that shit..

either way, i just might have to do it...time is no where on my side right now.