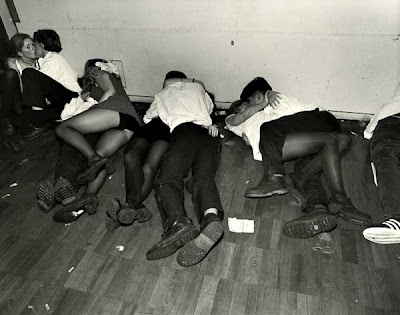 Thought I'd write you something else while I wait for the next episode of Weeds to load.

I'll definitely be checking out Bob's exhibition with Mistress Ivy this month at The Little Black Gallery. I am supposed to be heading back into the Skin Two office soon to help Tim choose photos for the photobook they plan to bring out later this year. So my assignment has been to compile a list of some awesome pervy photographers. Haven't actually..done my assignment but I can easily spit out a couple off the top of my head, Bob being one of my first.

ANYWAY...May started off pretty random. I went to the campus clinic after handing in all my work to get a prescription for some contraception that'll last me the summer and walked away with enough for up to 2010. Totally not complaining here. But as I was there already, I decided to mention a couple other bodily issues regarding my stomach and my stupidly weak bladder. As a result of opening my stupid big mouth, I've now been assigned a food diary for the next 3 weeks and have to go back in next week to pick up the results from some piss I gave them. *rolls eyes* I'm what you might call a seasonal hypochondriac, so adding that on top of this swine flu crap, and me thinking I can battle it with a mini bottle of hand sanitizer, just isn't working right now.

May was supposed to be chilled beyond comprehension. I mean, just yesterday I handed in something like 20,000 words of work for just one of my classes, which, may I remind you, the dissertation that everyone else is doing equates to 10,000 (why the fuck did I think a creative degree would be less of an ulcer?). Surely, after that, I deserve some quality time with NOT ONE FUCK but myself. And yet, life's a hustle and a girl wants to cruise the Cali freeways with her boyfriend this summer, so work eslewhere continues. Just got commissioned to do 3 bar reviews with a deadline for the 18th, along with a couple other writing gigs here and there. And of course I am still organizing my big sale. All this, not including the fact that everybody wants to see me before I leave and all the corner co-op's alcohol wants me to drink it and party my fucking liver away at any and every event pre-June. A food diary consisting mostly of alcohol would be quite embarassing. Yesterday's entry is already a little trimmed down by 5 drinks or so...

Other than all this ridonculousness, today was pretty laidback and awesome. Le Vampyre and I went to Wagamama for lunch. After chili squid and amai udon, I was pretty ready to head back to my bed just because I can now. But then he mentioned that he got the Gremlins DVD and then that was just totally blown out the window. So, little monsters back at his place then because he didn't have part 2, I left. Then Mistress Ivy begged me for a bit to come to Subversion tonight but as that ends at 6AM and I am typing this, that means I instead opted for back-to-back Weeds and maybe another Gu brownie (but that probably shouldn't appear in my diary too much either!). By the way, Gu brownies are cherishable goods. Get on it.

Labels: My Life and Other Casualties, Other People's Pictures