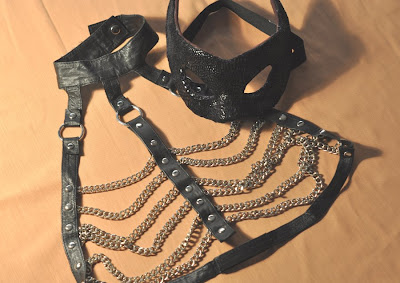 Hello. Everybody reads Luxirare, right? So, you may have remembered Ji Kim's chain harness top (above). Well, the one I bought yesterday is pretty much the exact same thing. And I decided, I'll fuck around in it for a month over some things in public and over nothing at fetish clubs then sell it in my last week of Londonness (that being the first week of june), so holla if you want this for 20 quid. Laziness just kicked in but I'll take a picture of it soon.

Today was quaint. Slept til late, did a bit of work, met Mistress Ivy to teach her some yoga (which we plan to keep up a couple times a week until I leave) and now am just chillin' like a villain with some pringles, tea and Season 3 of Weeds. There's only up to season 4 online so I might have to slit my wrists soon.
Posted by Kara at 1:07 AM

Labels: Fashion Fuck Yeah's, I Buy Things, My Life and Other Casualties

Sure, I'll bite, if it's leather. I could do with a few more chains in my life.