IT TASTES EVEN BETTER WHEN IT SMELLS LIKE DANGER

Over the past 2 days I...
*taught someone how to use chopsticks

*felt bad and hid under a bowler hat at first from him because my co-worker who wrote the final review gave it a 5/10, which was released in print that same morning

*got my hair done

*blew out a birthday candle

*forgot to make a wish

*found an awesome store that sells septum piercing jewelry and ACTUALLY ran into a no-joke-smokin' guy with the same piercing (VERY strange occurrence here) looking to buy some in an emergency as well.

*was checked out at a club by a group of white guys, one of which was a co-worker who didn't recognise me (pretty sure it was him especially after receiving an important doc from him today that started off 'I hope you're having a good weekend!')

*had a watermelon martini

*did not get drunk!

*rolled over in bed and thought 'what the fuck am I doing?'

*got burned by deoderant?

*had a conversation in Tagalog!

*was given the nickname Tokyo (was nearly donned 'Lee')

*discussed sex with my mother

*got a glass of red wine knocked out of my hand at a club and had it spill all over this girl, and just quietly walked away

*unintentionally wore a new Topshop sweater with a panda on it (honestly not bought because of ex boyf Panda but because cute) when I went to visit Fox (yikes?) 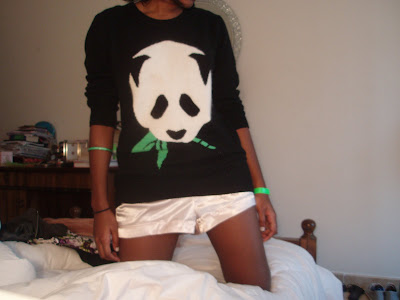 Labels: My Life and Other Casualties