AND THE HARDEST PART WAS NOT LETTING GO NOT TAKING PART 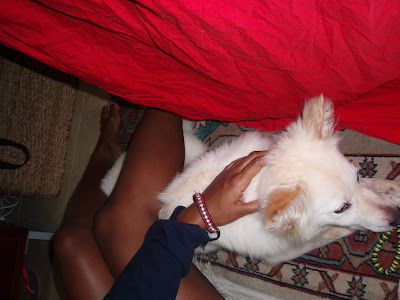 This is my dog Rigby. Well, my brother's. He asked for him for his 18th birthday. He came into our lives in October 2008 as a frantic little puppy that I thought had popped a couple MDMA. But no, that was not his case. He was just an awesome fuckin' puppy. He pissed everywhere and ate my socks, but it was pure love.

I was busy sleeping my life away when he came into my room to wake and greet me this afternoon, along with my brother at the other end of the leash. He promptly started chewing on my neon pink flip flops. I tossed my sheets and my hair and stared at him thinking how much I loved him. They had just returned from the vet's seeing about his bum leg. Despite his manic bounds and leaps around the house to attack my mom's newly bought plants decorating the foyer, he's still been in a great deal of pain. Running is no problem; he just can't walk very well. And when I take him outside to use the bathroom, he sometimes ends up pissing on himself because he can't raise the bum leg, and if he raises the other, the bum leg can't support his back weight. So...it just really fucking sucks. 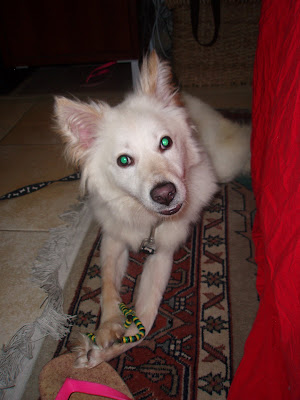 This is my dog Rigby. My father can't pay for the surgery. It's just way out of his budget right now. They're going to put him down. So if you live in Dubai or Abu Dhabi and don't want to see this happen and think it's in your power to do something about it, please write me. It would mean so much to me. I just can't let that happen right now. I won't be able to take it.
Posted by Kara at 1:32 PM

Labels: Abu Dhabi, I Hate It, My Life and Other Casualties, Not So Righteous