I LOVE IT WHEN YOU CALL

Unfortunately, I wake up at ungodly weekend hours now so here's what I've just done. No bloggers have ever tagged me in that 'What's in Your Bag?' thingie so I thought I'd take the liberty of tagging myself this morning because
a) I was frantically searching for something anyway so my bag's contents were already littering the hotel room
b) I didn't find that something, which was a USB stick containing some new 'fashion' photos I took for the blog
c) I thought it would make for interesting insight in a few years time as to what my life was like via the contents of my bag
d) It would show that I don't really give a fuck that I was left out of a fun blogosphere ritual and that I'm shameless enough to do it on my own
So here goes...
WHAT'S IN MY BAG, MINUS THE BAG (I'll do bags later) 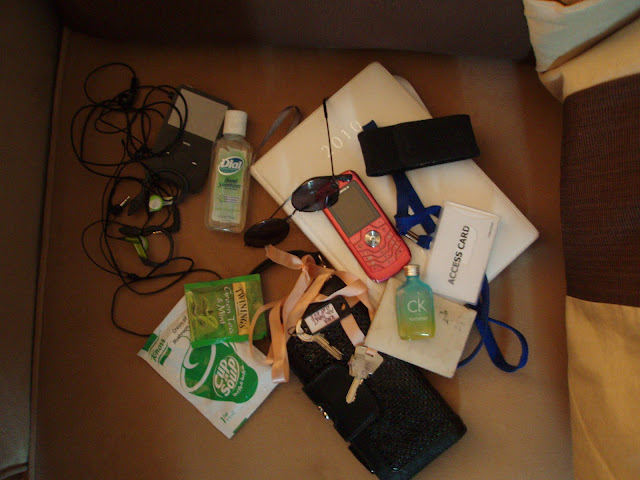 1. Two sets of headphones, one regular external noise cancelling pair, one water/sweat proof pair for the gym. I keep it on me at all times these days because I've stupidly started training for a half marathon with my co-workers and we got a good corporate deal for the gym down the street from where we work.
2. (At this stage) a VERY old school 30GB iPod, still going strong
Currently listening to: Deep Purple - Mandrake Root
Get on it.
3. Hand sanitizer. For someone who spontaneously asks her boyfriend to come lie in the spit/shit/piss ridden grass with her and who has no problem abiding by the three second rule and drinking water from the tap, I feel kind of silly carrying this, but I mean, you gotta keep SOMEthing clean, I guess. Do you carry it? Just curious...
4. Planner. I love planning.
5. One of many circular sixties sunnies.
6. A painfully old Motorola phone. In the last 5 months, I have either lost or had stolen three mobile phones. Touch screens, cute bumble bee coloured Blackberry-esque Samsungs, all sorts...in taxis, on highways, in bars...hence a re-connection with this trooper I used in the UK. The battery only lasts about halfway through one 10 minute conversation, mind you, but hey, text messaging is still a handy way to keep in touch, right?
7. Digital dictaphone - a journalist's best and worst companion
8. Office building access card
9. Travel-sized bottle of CK Summer - I love the CK Summer scents so a while back I picked up a travel-sized collection of the last few released. Speaking of perfumes though, I kinda dig Thierry Mugler's 'Alien', but I never quite imagined myself wearing a scent called 'Alien'? Ah, fuck it.
10. (underneath bottle) those nose blotcher thingies for greasy-faced people. Thank you, daddy, for such a gifted T-zone!
11. Wallet containing 500 borrowed dirhams, a silly library card-esque laminated Trinidadian driver's license, a new Emirates Identity Card so no bouncers will laugh at my library card license anymore, a newly activated bank card (had mine stolen recently), an expired HSBC card (guys, obviously, you're fired so stop sending me mail), Waterstone's card, business cards, photos of exes it's probably time I stashed elsewhere, Chinese, American and Filipino dollars (interesting...a combination of my ex's origins), and a loyalty card for the Pinkberry of Abu Dhabi  known as Yogoday (HEY, THEY DO TAKEOUT NOW!)
12. Two sets of house keys - mine for my new studio, the other for my parent's place becuse my dad's convinced I'll be back soon. Works wonders when they're out of town though.
13. Cup'O'Soup and green tea, just in case I feel faintish during fasting, although my stomach pretty much calls it a day from noon after realising that furiously grumbling has been getting it nowhere.
IȾ iϟ Ẇrittɇn.
Posted by Kara at 8:47 AM

Labels: Haha, My Life and Other Casualties

For such an unpleasantly-named scent, I believe Alien is the only one worldwide to have its own official fan club. So there's that.

good lookin' out.
And the latest Mugler scent sounds even worse but probably smells even better. Wait for it: Womanity.

What scent do you wear? Looking for something a little darker now so naturally I had to check with Philippa Snow first...

Welcome back to the blog!