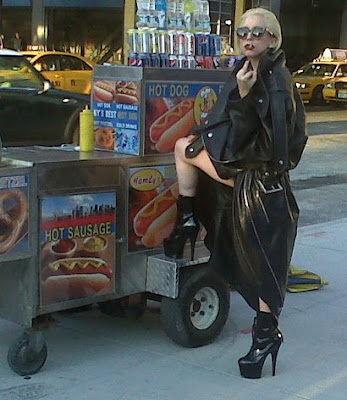 I took some time off work, and in that time off I...got dumped and got a UTI so far advanced it had me rolling around in bed for a week with high fever, body shivers, heart palpitations, breathing problems and body aches. And I just missed two days off work on top of that. People have been throwing cold water on me, poking me with needles, forcefeeding me, peeling me off of floors...It sounds like a Gaga video but I promise you it wasn't as visually stimulating. So yeah, I think this is called for.
But honestly, it's more than that. I feel like I've outgrown this space. Originally, the idea was to shut it down but I'm the competitive type, and even though I am not striving to do 'Blog of the Month' blogging or be plastered on the sides of buses or billboards (what? :D), I know I'm going to regret no longer being 'part of the loop'. And outside of London, this still is the one space where I feel completely free to be the real goof that I am, because as open-minded as this city wants to be (the same city that Sex and the City 2 is based on, but which refused to let their crew in for filming because "we just don't have sex in our city like that") they still have a long way to go. I've already turned it down several notches, and it's still not enough for these people - I just don't know how much lower I can go. But anyway, another reason I won't shut it down is because what's also great about blogging for me is that it's like producing your own shitty magazine, which in turn works wonders therapeutically as I'm currently working under a slightly unhinged editor.
In conclusion, I am very drugged up and I will probably see you very soon. I just love feeling sorry for myself.

Labels: Girl on the Verge...